Skip to content
Zechariah 2022 Bible Study (Return to Me)

Zechariah 8, Be A Blessing 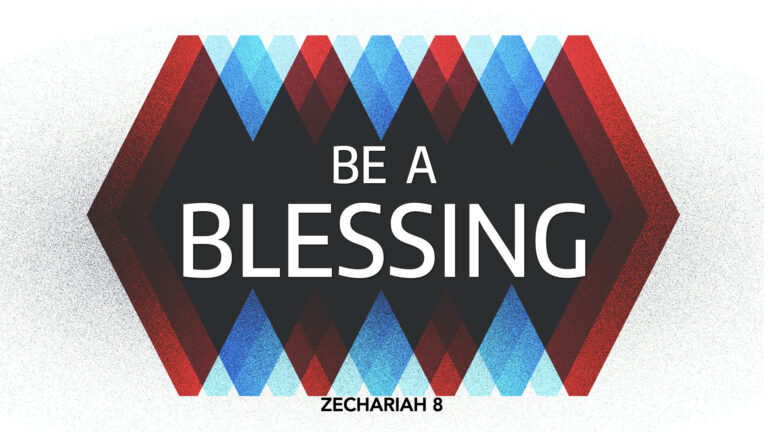 If you have been to the Magic Kingdom at Disney World, there is an attraction called the Carousel of Progress. One of the great reasons that people ride it is because you can sit down in air conditioning for a 30 minute attraction. The ride looks at what life was like every couple of decades and what those advancements were over the years. It is pretty amazing to think about where we were as a country technologically 100 years ago and then notice how fast things improved to get to where we are today. But at the end of each scene as you are about to move to the next decade of advancements, the main character will sing a song that says, “There’s a great big beautiful tomorrow, shining at the end of every day. There’s a great big beautiful tomorrow, just a dream away.” The point of the song is to show how life can be so much better going forward. This is the message that Zechariah is bringing to God’s people to give them hope. Your future is bright because God is going to do great things. So let’s notice this message and its meaning for us today.

Remember that this discussion that God is having with his people began in chapter 7 when the people were asking the Lord if they needed to continue to fast and mourn each year on the anniversary of the temple’s destruction. God’s response was to ask the people if they were really doing it for him or for themselves. The people were going through the acts of worship but they did not have the right heart. Their motivation was not for the Lord but had become mere ritual and tradition. But listen to what God says in verse 2 after challenging their motivations. The Lord declares that he has extreme jealousy for Zion. The picture is that God is so jealous for his people that he has returned to live in Jerusalem with his people (8:3).

The Lord says he is going to live with his people in the midst of Jerusalem. When God does this, Jerusalem will be called the faithful city and the mountain that Jerusalem sits on will be called the holy mountain. Now as we read these descriptions, I want us to think about when these things happened. God is going to live with his people and when he does, Jerusalem will be a faithful city to the Lord. Not only this, but verses 4-5 depict a time of peace, prosperity, and rest. The elderly will sit in the streets of Jerusalem with a staff in their hand and the young will be playing in the streets. Now it is important to consider that this is not the way things are at the moment Zechariah is saying these words. The city is in ruins. The temple is being rebuilt. God is not living with his people. Even when the temple is completed in 515 BC we do not read the glory of the Lord filling this rebuilt temple. Jerusalem is not going to have a time of peace, prosperity, and rest during this time either. Persia has been resisting their work up to this point. Greece is going to cause them problems for the next couple hundred years and then the Roman Empire is going to subjugate them after that. This is pointing to a great big beautiful tomorrow. But what God is picturing in the future sounds impossible (8:6).

We get this way with God. We get this way with God in our lives. Life gets hard and we think that there is no way for our future to be bright. We think there is no way that life can get better. We have experienced too much pain. We have experienced too much loss. We hurt too much. God could not possibly bring about such a massive reversal for his people. But this is exactly what God is addressing. In verse 6 the people just cannot see how their future could be brighter than their past. God responds by declaring that just because it is too marvelous and impossible for you to consider doesn’t mean it is too marvelous or impossible for God to do. Just because it is difficult does not mean that God cannot do it! We so easily underestimate the Lord. This is what the people are struggling with.

But here is what I also want us to see. We read in chapter 7 that the people have a wrong heart about their worship. But God is so jealous for his people is still going to come to them and reverse their condition. When is this all going to happen? Look at verses 7-8. The Lord will save his people from the east and the west. The Lord will bring them back and they will belong to the Lord and Lord will be their faithful and righteous God. Even if you have not doing life right in your past, you can return to the work of the Lord and he can save and reverse your condition.

Now it is time to hear a hard part of God’s encouraging message. In verse 9 God calls for the hands of his people to be strong and build the temple. But look at what God says in verse 10. When the people did not have their lives right with God, look at what God said he did. God made it that their lives were difficult. This is exactly what God said through the prophet Haggai in chapter 1. God reminds of them of this truth as they are building the temple. God was the reason that life was not going right. God was the reason. It was not by accident. We attribute far too many things in our lives to accident rather than to God. Look at verse 10 again. The reason the people were not safe from their enemies is because God turned everyone against one another. We can so easily miss this. What we do not need in our country is more laws or less laws because of the rise in violence. What we do not need is a change in policies or change in political parties. What we do not need is yet another president who does not solve the problem. The reason why things are the way they are is because we are a nation who is not right with God. Until we turn the hearts of the people back to the Lord, nothing is going to get better. It does not matter how many policies we pass, laws we change, or politicians we vote for. God is saying that I am sending you a message. I turned everyone against each other.

But God says that it does not have to be that way. God says in verse 11 that he will not deal with his remnant this way but instead will bless them. We have to see that blessings are from God. Economic prosperity or failure is from God. I brought you trouble but I will bring you peace. Your future is bright because God is in charge of your future. God can bless you and reverse your life. But now we come to the title of the lesson in verse 13. God’s people have been a curse but now God will save you and you will be a blessing.

Second, look at verses 18-19. In these two verses God finally answers the question that is asked in the first three verses of chapter 7. The people asked if they should keep fasting and mourning over the temple’s destruction. God answers that their fasts and mourning are over and now they were to use those days for feasting and celebration. Because the temple will be completed and God will be with his people, then there should be celebration, not fasting. There should be joy and not mourning. But notice that the celebration is not merely that God is with his people as symbolized by the temple. Look at verses 20-23.

People from all over the world are pictured saying to one another that they need to go seek the favor of the Lord and draw near to the Lord (8:21). Even powerful nations will seek the Lord and look for his favor (8:22). Now look at verse 23. In those days ten people will take hold of one of God’s people and declare that they are going to go with him because they had heard that God was with him. The greatest way we can be a blessing is by people knowing who we are so that they can come to us to know more about God and to seek his favor. We are called to share God’s purpose to the world. Consider what is said in verse 23. Would someone know to come to you because they know that God is with you?

Now think about this prophecy. When were the nations supposed to flow to Jerusalem and seek the Lord? The prophets all confirm that this would happen when Jesus, the new temple, came. As Christians we are described as the people who have come to the New Jerusalem, to Zion (cf. Hebrews 12:23; Revelation 3:12; Galatians 4:26). We are the blessing to the world so that people can find God’s favor. This is our word of encouragement. As the world falls down, more will turn to seek him. The disintegration of our culture and society is going to be the moment that people are going to shift their thinking about God. Good times do not turn people to God. Prosperity does not turn people to God. Difficulty causes people to reevaluate their lives and look for something else. God said this at the beginning of the chapter. He gave trouble to Israel so that they would seek him. We are to be the people that the world looks to when trouble comes so that they can find the Lord’s favor. We cannot recoil and hide when the world gets darker. We need to shine all the more. We cannot panic like the world or act like our hope is in this country or in this world. This is our time to point to a heavenly kingdom and our heavenly hope. This is our time to be a blessing to the world. Be the people that the world comes to because they see our joy and hope that is grounded in God and not this world. It is not a time for mourning but for feasting because we have the temple in Jesus and that temple and that holy city cannot be shaken.

Previous: Zechariah 7, Who Did You Worship Today?
Next: Zechariah 9, Your King is Coming to You